This month I have been posting on Millie’s Facebook page something a little different.  I have made a bilingual alphabet colouring pages printable for you.

A few months ago we were given this beautiful alphabet book (in English) as a present for my little girl.  She absolutely loves it, however, it was very hard for me to translate to Spanish on the spot because I didn’t know whether to follow the image or the letter.  So I got this idea to make my own little animal alphabet, but I didn’t really pay attention to it as I was also working on finishing up Millie makes a new friend.  For some reason, this idea kept coming into my head so I decided that  I had to do something about it. 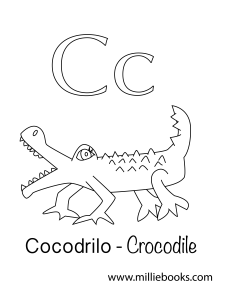 For weeks I kept thinking of the animals with different letters of the alphabet that would be the same in English and Spanish and then finally I came up with a list!  Here is where I gave myself a little challenge to post one letter everyday during February.  Now that the month is over I just wanted to keep this somewhere as a printable version so you can come back to it any time you need it.

I really hope you and your kid(s) enjoy it as much as I enjoyed making this.  Download the printable Bilingual animal alphabet (Spanish-English) and get colouring!