When writing “Millie and the lost colours” learned a few things that may be a bit trivial but I think they are interesting.  Here they are!

1. It’s so hard to decide on accents and spellings – Writing a bilingual book is hard enough but deciding whether to use American or British (and Aussie) spelling was even harder! I had managed to sort of avoid some of the spelling that gave away one or the other but in this book even the title had a word with a different spelling. I have to say, that considering that Millie is a Mexican Australian little girl, she would have an Australian accent and would even call it soccer instead of football.  True story!

2. There’s more to grey than meets the eye – Before starting with the digital illustrations for Millie and the lost colours, I enrolled in a children’s book illustration course. I learned a lot of the basics and techniques that I will be using in future books, but what blew mi mind was that the colour grey can have many different undertones.  Maybe I knew it subconsciously, but I was not aware of this.  So, look at the illustrations and you’ll see that there is an undertone colour waiting to come out.  To illustrate it this way, it took me a lot longer but I think it was worth it!

3. There are actually more than 7 colours of the rainbow – The seven colours of the rainbow we know and love are there because those are the only ones that we can see. It seems there are about 1 million colours in a rainbow, but they are not visible to our eyes. For more quirky facts about rainbows here’s an article of one of my favourite podcasts, Stuff you should know. 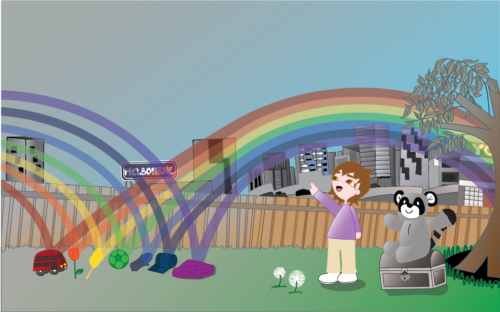 4. The world is full of amazing architecture and special places – In this book, I made a bigger effort to have more detailed backgrounds and of course to do justice to the place in each illustration. I got to appreciate more the architecture of all these different places and I’m so excited to show them to you. 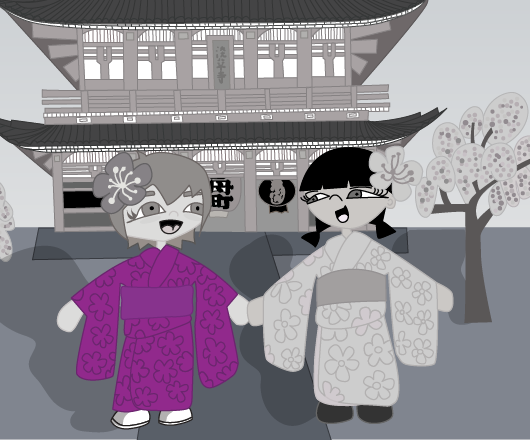 5. There may be more than one story in this book –

I originally was going to keep just Millie and Mr. Raccoon travelling around the world. However, when I got to Japan, ‘something’ was missing.  I then drew a little girl in a kimono and I knew I had to add other little kids in the story.  The text won’t say anything about them because a children’s book needs to be relatively short and I also needed to keep space for the Spanish.  However, your child can use their amazing imagination to come up with ideas on how they are helping Millie in her quest.

5. There’s no order of adjectives in Spanish – Up to this point, I have been writing all my books first in Spanish and then translating them to English. I wrote the very first draft of this book in English in an author workshop at my local library.  While I tend to easily translate on the go, I found it so hard to make the Spanish translation sound nice . In Spanish, we don’t really follow any patterns to describe something like we do in English.

And there you have it! These are the five things I learned while writing “Millie and the lost colours”.  If you want to get the book you can find it here.